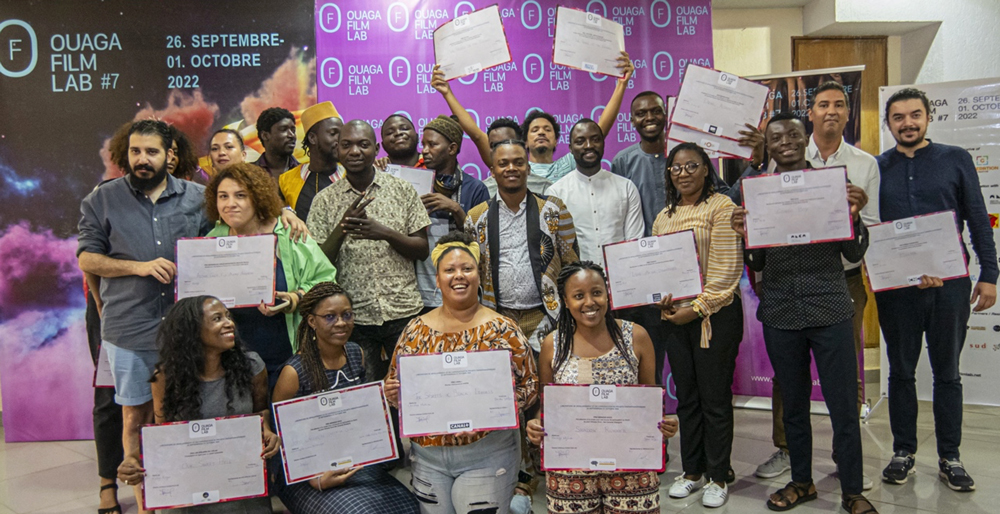 After an intense week of meetings, mentoring, training and networking at the Ouaga Film Lab and despite the political situation in Ouagadougou, the award ceremony took place on Saturday 1 October. We are very pleased to announce the winners of this 7th edition of the prizes donated by our partners:

IDRISSA OUÉDRAOGO AWARD: Grant for a writing residency at the Moulin d’Andé, in partnership with the CNC (France)

SUD ÉCRITURE AWARD: Grant for a writing residency in Tunisia

FRENCH INSTITUTE AWARD: Invitation offered by the French Institute Paris to the director and producer of one of the Ouaga Film Lab projects at Fespaco 2023.

ROTTERDAM LAB: Grant for a producer to participate in the Rotterdam Lab during IFFR – International Film Festival Rotterdam (The Netherlands)

MIRADAS DOCS AWARD:
Preselection of a project for a grant to participate in the Miradas Docs pitch forum during the International Documentary Film Festival Guía de Isora (Canary Islands, Spain)

Selection to the writing incubator at MiradasAfro

We would like to thank our partners who have made this edition possible, offering the young generation of filmmakers from the African continent the opportunity to continue meeting and creating together.

Aisha is a 26-year-old Somali woman who works as a caregiver for the elderly in Ain-Shams, a neighbourhood in the heart of Cairo. There she discovers the underground society of African immigrants and the tensions between the different groups. In addition to the routine and pressure of her job, and a dead-end relationship with an Egyptian cook, Aisha finds herself involved with the gang that controls her neighbourhood, who blackmail her and force her to steal her patients’ keys. Routine, pressure of dreary work and being stuck in a loveless relationship with an Egyptian cook leads her into impasse.

Ernestina “Titina” Sila, thirty years old, (1943-1973) is a Bissau Guinean heroine and martyr, comrade in Amilcar Cabral’s struggle for the independence of her country. Her figure as a military woman and warrior commanding an army of more than a thousand men contrasts with the “postcard” image of the African woman always with a bundle of wood on her head and a child on her back.

With my van (just like my father), I take photos and video images from archives and press clippings, to crisscrossing Guinea Bissau to hear Titina Silà’s story from her relatives, her comrades in political struggles, and also from Guineans themself. I will also interview researchers, journalists, politicians, and anonymous people on the place that Titina Silà still occupies today in the hearts of Bissau Guineans.

Bangui, Central African Republic. Albert is 16 years old and has just discovered the world of music. He is fascinated by this world and dreams of making a life for himself in it, despite the admonitions of his parents who absolutely want him to study hard. With his musician friends, Rafiki lives in a carefree youth. Yet Rafiki is not a Central African like the others. He is a refugee. His parents fled the Congo when he was very young. And their status in Bangui remains very precarious. When his father started to apply for Central African nationality, things went wrong and both parents were sent to prison. At 16, Rafiki finds himself without any support. He has to take care of his four younger children and find the money to get his parents released. Against all odds, music will help him.

Dear Ajayi is a film set in Nigeria in the late 1990s. It follows the story of two sisters: Ade Ajayi, a devoted Christian and bread-winner of her home, and Titi Ajayi, a local upcoming singer who feels she’s hated by her sister because of her secular lifestyle.

Both are shouldered with the responsibility of taking care of Mama, their paralytic mother shortly after the demise of their father. A “film noir” with all shades of unrelenting bleakness versus earnest hope of the protagonists.

Issa Bougma was born on 28 June 1960 in Ouidi, a district of the city of Ouagadougou. One day while watching a Western film, he was touched by the acting of the Italian actor Franco Nero. Then, he decided to take the plundge. He adopted the clothing of the cowboy film actors, their style, and their lines. From then, he called himself “John Carlos, the Sheriff of Ouidi district” and created his own world, his own universe like a fictional film. He patrols the streets of the district every day.

Today, he is 62 years old. The neighbourhood has been modernised and most of the places he used to frequent have disappeared. The movie theatres and entertainment venues of the past have closed, but John Carlos the sheriff remains. That’s why I’m going to meet the character to understand his philosophy, his motivations and to immerse myself in his world.

Dakar, a large megalopolis facing the ocean, is today one of the most important hubs for cocaine trafficking. Abass Diao, 19 years old, presents himself as an orphin native of Fouta who has just arrived in Dakar. He has a gift, he inherited from his father the mystical power of water. He uses his swimming skills to serve a drug gangster, Ali Kande, better known as the “Grand Transporteur de Dakar”, who is some kind of Senegalese Don Corleone.

But Ali is getting older, his business is threatened, and his children are not ready to succeed him. With his talent and strength of character, Abass gains the confidence of the godfather who sees him as a potential successor. As Abass becomes unavoidable, the enemies of the present and ghosts of the past make life impossible for him.

In 1947,the rich subsoil of this part of the Ivory Coast generated the town of Tortya. Twenty-seven years later, the SAREMCI mining company closes. Then begins the adventure of the artisanal exploitation of the old diamond mines. Although it has provided the world with millions of carats of diamonds, Tortya remains an austere town with a poor population. From the first populations settled with the opening of the diamond mines to the present day, the town of Tortya retains the same appearance as if time had stood still. But in the end, the exploitation of the precious stone has degraded the rich ecosystem in which Tortya and its lands were bathed. Having left at the age of 7, Foloki, aged 40 years, returns to her roots. Through three generations of age, she shares her beautiful memories contrasted with the current reality, the ambitions of Tortya and its population.

In 2028, in a gloomy Tunis infested by a Pandemic, Zaïn loses his wife Nour with whom he is madly in love. His grief is immense. He turns against the system and refuses to take the daily pill that is supposed to protect the population from contracting the virus. Since then, he has been hunted down by the authorities and is hiding in the Medina. While the whole population has stopped dreaming, Zaïn starts dreaming again and sees his wife who tells him that there is something going on in connection with this famous pill. He also meets several people in his dreams who tell him they are his ancestors.

Away from her home country for over 5 years, Fátima Trindade (25), a young lawyer who lives in Fortaleza (Brazil) is forced to move back to São Tomé and Príncipe to uncover the reasons behind her teen sister Fayna (15) suicide attempt. Back home, she has the chance to heal her relationship with her sister who stopped talking and with their estranged mother Fernanda Santos (44), who refuses to see what’s going on with Fayna. While pursuing answers, Fátima realizes that her sister has her share of skeletons in her closet and she is confronted with her own still open wounds from the past.

No comments to show.